Dewey Number View online Borrow download Freely available Show 0 more links Set up My libraries How do I set up "My libraries"? These 16 locations in All: Australian Catholic University Library. 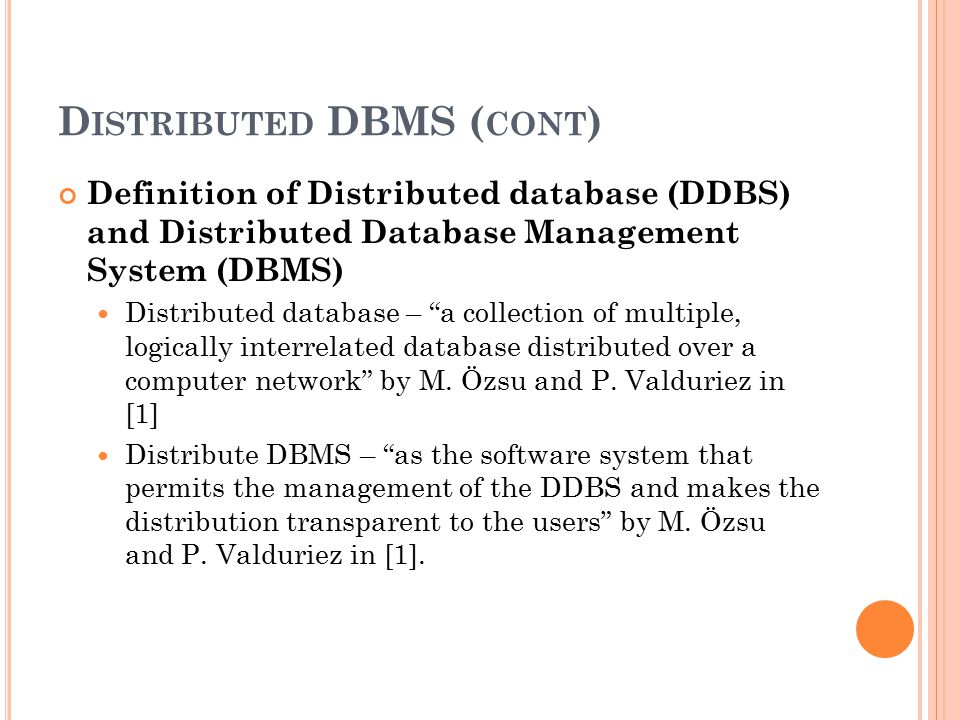 Found at these bookshops Searching - please wait Following the same approach, we introduce a new chapter devoted to current issues Chapter This chapter now includes sections on data warehousing from a distributed data management perspective , World Wide Web and databases, push-based technologies, and mobile DBMSs. We are quite satisfied with the result, which represents a compromise between our desire to address new and emerging issues, and maintain the main characteristic of the book in addressing the principles of distributed data management.

Certain chapters, in particular Chapters 15 and 16, require further depth, but those will be topics of future editions.

The guide to reading the book, introduced in the Preface to the first edition, is still valid in general terms. However, we now discuss, in Chapter 3, the relationship between distributed DBMSs and the new networking technologies. Thus, this chapter no longer serves simply as background and should be read at least the relevant sections following Chapter 1.

We have set up a Web site to communicate with our readers. The site is at cs.

This site contains presentation slides that accompany the book as well as other information regarding the book's use as a textbook. Many colleagues have helped with the revisions.

Maggie Dunham and Nandid Soparkar provided detailed and early comments on the overall structure and content of the book. Maggie also provided input for the mobile database management section Section Ioannis Nikolaidis helped immensely with the revisions to Chapter 3he made us rewrite that chapter three times.

Jari Veijaleinen provided many exercises which have been incorporated into this edition. Esther Pacitti provided input for replication protocols. Alexander Thomasian's input for performance evaluation work was invaluable, as was Elliot Moss's critical review of the nested transaction discussion in the transaction processing chapters.

Mukesh Singhal advised us of the new advances in distributed deadlock management. Ken Barker and Kamalakar Karlapalem provided the material that formed the basis of distributed object database design in Chapter Kaladhar Voruganti wrote the first draft of the architectural and system issues sections of Chapter Randal Peters read Chapter 14 and forced us to revise many parts of it. The distributed garbage collection section of that chapter is based on a draft provided by Laurent Amsaleg and Michael Franklin.

Amit Sheth provided input on the revised outline for Chapter Asuman Dogac read the complete chapter and provided feedback. Mokrane Bouzeghoub and Eric Simon helped on the data warehouse section of Chapter The material in push-based technologies section was reviewed a number of times by Stan Zdonik and Mike Franklin.

Both of them also provided significant feedback about the characterization of data delivery alternatives. We are indebted to all of them, as well as to those who helped with the original edition of the book and whom we cite in the Preface to the First Edition. Many other colleagues have asked questions and provided suggestions over the years; unfortunately, we have not kept their names. Our thanks to everyone who has provided input.

We look forward to receiving more suggestions on the second edition. We have had very good luck with our editors at Prentice Hall.In addition, the performance models of distributed database systems are not sufficiently developed. This post presents the stages of the top-down approach by means of a a schema, which gives a macro vision of the process.

The performance of the commercial DBMS products, even with respect to these benchmarks, are generally not openly published.

We have had very good luck with our editors at Prentice Hall. 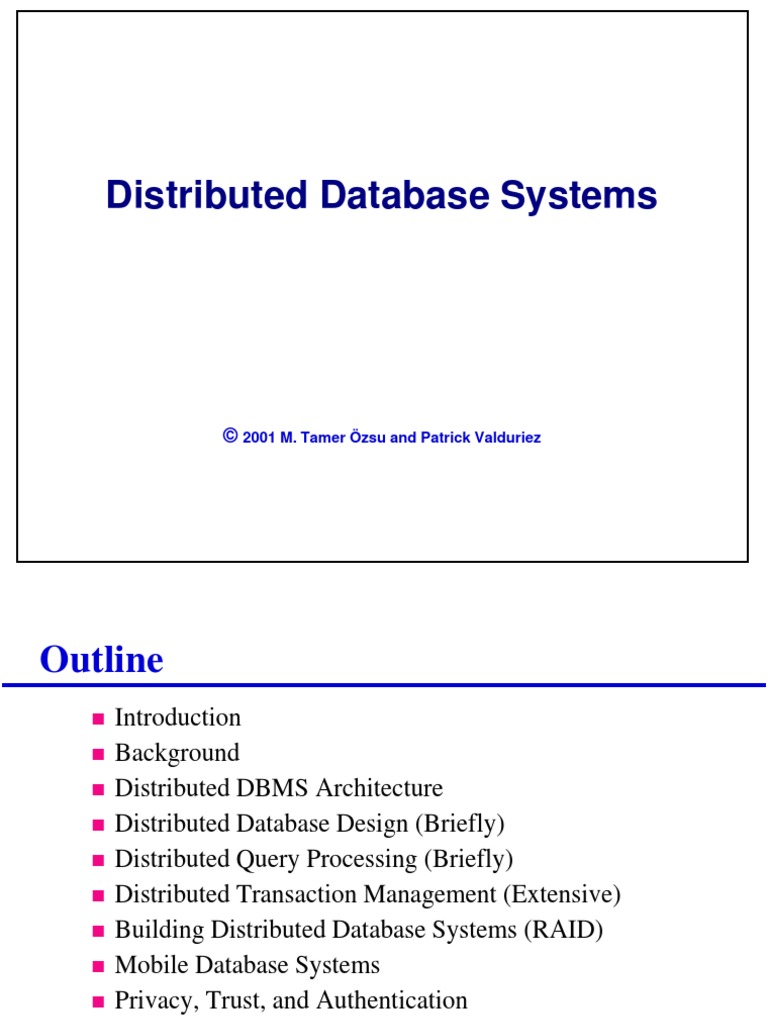 Chapter 13, which focused on the relationship of distributed DBMSs and distributed operating systems, has been dropped and some of the material is incorporated into the relevant chapters. Almost all the performance studies that we know assume a very simple network cost model, sometimes as unrealistic as using a fixed communication delay that is independent of all network characteristics such as the load, message size, network size and so on.